Whenever I think of Shiva, I think of Him seated in a meditative pose in the Himalayas, ash-smeared body burning with and radiating tapasya.  I think of the moment I had darshan at Amarnath, surrounded by snowy peaks and glaciers, gazing upon the majestic ice linga in the cave.  It was the most blessed moment of my life.  It was the culmination of many pilgrimages attempted and undertaken.  To me, Shiva represents all that is lofty and pure, all that is auspicious, the epitome of tapasya (fire born of spiritual practice). 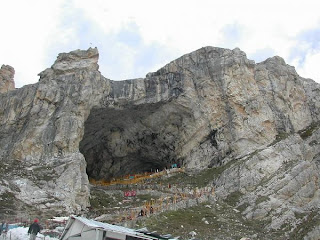 While Sri Radha-Krsna is my ishta-devata (preferred form of Iswara for personal worship), I also have a special relationship with Shiva.  Some of my most intense spiritual moments have been during pilgrimages to Shiva’s abode—in Kedarnath, Amarnath, and Tunganath, for example, and also, curiously, in Puri.  As moved and inspired as I was by my visit to the Jagannath Mandir in Puri, my most memorable moment during my first trip to Puri came during an evening aarti at the Bharat Sevashram Temple in Puri.  There was a Shiva linga there, and during the aarti, I felt Shiva asking me, “Will you surrender your life to Me?”  I responded wholeheartedly and instantly, “Yes!”  Since that moment, I have tried to make sadhana the first priority in my life.  I haven’t always succeeded, but no matter how many times I fall, I remember that moment and somehow it gives me faith and strength to come back to the path of sadhana.

If Hinduism / Sanatana Dharma were stripped down to one deity, one form of Iswara, I think it would be Shiva as he embodies all aspects of our Dharma.  No other deity encapsulates as perfectly both the nirguna (without form) and saguna (with form) aspects of Iswara, as explained in the Shiva Purana.  Shiva belongs both to the acharyas (the mainstream preceptors of Hinduism) and to the avadhutas (realized ones who generally shun mainstream society and social conventions).  He embodies the Vedas—perhaps the most sublime of Vedic hymns, the Rudram-Chamakam, is in His honor—yet, he is also the favored Lord of those who follow the Tantras.  He is attainable by those who follow Dakshinachara (the right-handed path of sadhana, for those who follow socially accepted forms of worship) and those who follow Vamachara (the left-handed path of sadhana, associated with non-conventional forms of worship and what most people stereotypically associate with Tantra today).  He is the most severe renunciate, yet He is also worshipped with Parvati as the Divine Couple in the form of Ardhanareeswara.  He is the master of formless meditation and world-negating philosophy, but He is also the master of all the arts as Nataraja, Lord of music and dance.  He represents the path of unrelenting austerity and penance, but He is also most pleased by the simple offering of abhishekha, bathing Him in his linga form.  His favorite ganas (associates) are wild, grotesque and sometimes frightening, but of all the devas, He is the one who is most easily pleased, most easily moved to dispense boons and blessings.  He is Iswara for all beings, in both his fierce and gentle forms, attainable through an astoundingly diverse number of paths and forms of worship.

Of all the different Hindu holidays, Maha Shivaratri is the most important one for me.  It is the one day and night into which I can pour all the love I feel for Shiva.  My regular routine of sadhana and puja does not include much worship of Shiva, at least not as much as I would like.  This is the occasion when I can make it up to Him.  This is one 24-hour period in which I can focus solely on Shiva.

I usually spend Maha Shivaratri at the Ganesh Temple in Flushing, NY, where the occasion is celebrated in an elaborate way with a lot of pomp and devotion.  If for nothing else, I will always be grateful to this temple for the beautiful Maha Shivaratris I have spent there over the course of several years.  As it happened, this year, due to various circumstances and Shiva’s wishes, I ended up spending Maha Shivaratri at the Broome Street Temple.  It was a very fulfilling experience, and I am grateful to have had the opportunity to observe the all-night vigil there.

The puja was beautifully performed with a lot of bhava, melodious chanting of Vedic hymns and uplifting kirtan that was performed all night.  I was in an enraptured state all night, and the nearly twelve hours I spent there passed in a flash!  It was also an inspiration to me to see what Eddie Stern-ji and the team of volunteers at the Broome Street Temple have accomplished—what is unique about this temple is its meticulous adherence to traditional worship in accordance with Adi Sankara’s parampara while also being modern, welcoming and inclusive.  We should all support this temple and the great work that it is doing.

Last but certainly not least, this was a very special Maha Shivaratri for me because of an unexpected gift I received on this day.  Since my trip to Mayapur in early January, I have been gripped by a desire to learn how to play the harmonium.  I do not know exactly what I would do once I learn to play the harmonium (I have a feeling the neighbors in my apartment building aren’t going to be too thrilled about it! :-) ), but I feel Sri Radha-Krishna want me to play for Them as a way of pleasing Them.  For the past two months, I have been doing some research on classes and teachers, but nothing was quite coming together.  Then, all of a sudden, in the span of the last week or so, I was able to join a class that feels like it will be perfect for me.  Once I found the class, my next thought was, how do I get a harmonium?  The day before Maha Shivaratri, in a serendipitous way, without any effort on my part, I got connected with a devotee who was able to provide me the harmonium I wanted.  He brought it for me to the Broome Street Temple on Maha Shivaratri night.  This turn of events also led me to participate in the special Maha Shivaratri celebration at the Broome Street Temple, which I may have otherwise missed.

This was a blessing to me and deeply meaningful for a variety of reasons.  One, anything coming on Maha Shivaratri is auspicious, and this was especially true with respect to the harmonium since Shiva is the Lord of Music and Dance.  Second, wherever my harmonium practice leads, it is a comfort to feel that I have Shiva’s blessings as well as Sri Radha-Krishna’s.  Perhaps most importantly of all, I think Sri Radharani, Sri Krsna and Shiva wanted the harmonium to come to me on Maha Shivaratri to remind me that I need in my life both worship of Shiva and worship of Sri Radha-Krishna, that my Vaishnava practices are not in conflict but in harmony with other modalities of worship, that worship of one strengthens my worship of the other.  This reminds me that when I worship one, I worship the other as well.  There is no greater blessing for me than to know that an instrument through which I will practice devotion for Sri Radha-Krishna has come through the hands and with the blessings of Shiva.  I think that is how Sri Radha-Krishna wanted it, too.  This is a reaffirmation to me of the famous shloka from the Skanda Purana:

My heartfelt obeisances to Shiva!  Har Har Mahadev!  Om Namah Shivaya!  I hope all of you have had a blessed and auspicious Maha Shivaratri!

As a bonus treat, while I was looking up the exact words of the shloka above, I found this lovely hymn from the Harivamsha Mahapurana (part of the Mahabharata), which I’ve copied below with some minor modifications from
http://ramakrishnananda.com/forum/read.php?3,1228:

(Markandeya said: I do not see any difference between Shiva in the form of Vishnu and Vishnu in the form of Shiva They provide auspiciousness to the world.)

(I proclaim that the form with the soul of Hari (Vishnu) and Hara (Shiva) has no beginning, middle and end (destruction). This form is imperishable and having no decline.)

(As water that falls on water becomes water, when Vishnu enters Rudra (Shiva), he (Vishnu) will become full of Rudra (Shiva).)

(As fire that enters fire becomes fire, when Rudra (Shiva) enters Vishnu, he (Rudra, Shiva ) will become full of Vishnu.)

(Splendorous Vishnu and the great lord (Shiva) - both do good for the world. They are the creators as well as the destroyers of the fixed and moving beings.)

(The man who studies this daily and the one who hears it (daily) will ultimately attain the highest place due to the pleasure of Vishnu and Rudra.)

(I worship the lords Hari (Vishnu) and Hara (Shiva) along with Brahma. They are the supreme lords, responsible for the creation and destruction of the world.)

(I bow to Rudra (Shiva). I bow to Krishna. I bow to the one moving in the combined form.)